We’d like to recognize our Lemoine Wellness Champion of the Month for January – Rod Gravouilla!

For those of you who don’t know, Rod started his journey with Lemoine in 1998 as a Drywall Mechanic. Since then, he has transitioned into Assistant Superintendent in the Lafayette area.

To stay healthy, Rod drinks protein shakes in the morning. He limits his intake of bread, rice, pasta, etc.

When asking Rod what motivates him to stay active and healthy, he says he wants to have a good quality of life as he gets older. “I hunt and fish, so I want to be able to continue to do what I love for the rest of my life”.

Rod started his journey following a diabetes diagnosis that he received in 2019. He mentions his wife really pushed him to start losing weight and eat healthier. He says, “I was also feeling uncomfortable and would find myself out of breath doing normal everyday activities”.

Rod’s advice to living a healthy lifestyle is to be proactive, not reactive. “If you take care of your health early on in life, you won’t have to deal with having to make dramatic changes to your diet and your lifestyle later on in life”.

Awesome job, Rod! We are so proud of you! Keep striving to be a healthier version of yourself every day!

ENR TX LA
December 9, 2019
Autumn Cafiero Giusti
Performing a large-scale renovation across an active pediatric hospital presented numerous challenges for the project team on the $300-million expansion of Children’s Hospital New Orleans. The team had to manage 34 phases of construction during an unprecedented flood threat that restricted some construction for the better part of a year—all while maintaining critical functions at the state’s largest freestanding pediatric hospital.

“We often describe it as working on an airplane while in flight,” says Children’s Hospital spokesman Matt Schaefer.

The primary challenge has been to coordinate the complex phasing required to plan, design and build an expansion on the original site while making sure the hospital remained fully operational throughout construction, says Chris Putman, associate with structural engineer Uzun + Case.

“Early coordination with the owner, contractor and design team was critical for success,” Putman says.

Thanks to creative scheduling and weekly phasing meetings with the hospital, general contractor Lemoine Co. and architect EYP Architecture & Engineering, the project team has been able to stay on schedule.

“It’s a very collaborative effort in terms of trying to figure out all of the parts and pieces, which takes all three parties’ input to really iron out a solid plan that allows us to perform the work, the design integrity to be maintained and the hospital to continue their day-to-day operations,” says Wills Hover, senior project manager for Lemoine Co. on the construction manager at-risk project.

The expansion will create a four-story, 230,000-sq-ft medical tower with all private rooms at the heart of the campus and a freestanding 70,000-sq-ft behavioral health center. Other features include a 593-car parking garage, an entry pavilion, a pedestrian skybridge and an expanded central energy plant. Other new spaces include a 45-bed emergency center, a 28-bed cardiac intensive care unit, a surgery center with expanded operating rooms and a comprehensive cancer center.

In total, the project will add 350,000 sq ft to the Children’s Hospital main campus, expanding its overall square footage to 1 million and creating the state’s largest pediatric emergency department.

The expansion project broke ground in August 2018 and was about 60% complete as of December, with many portions nearing completion and occupancy.

Keeping a project of this size on schedule makes for a difficult task on its own. But the project team encountered a major unforeseen challenge that resulted from the hospital’s close proximity to the Mississippi River. Any time the Mississippi River flood gauge reaches 11 ft, the U.S. Army Corps of Engineers restricts below-ground construction work taking place within 1,500 ft of the river levee.

New Orleans construction teams know to anticipate these kinds of events. But 2019 was an exception, with river levels remaining elevated for an unprecedented 292 days. “So no digging, no underground utilities, no deep foundations. And unfortunately, it seems like since we set foot on campus, there have been high river stages, more so than historically,” Hover says.

Early on, the project team identified critical regions of the existing buildings that had to remain open and considered how to partially demolish adjacent areas while ensuring the stability of critical parts of the hospital.

Of particular concern was a corridor connecting the hospital and clinic buildings. Prior to the expansion, the roof of this corridor housed all of the main power and water lines that fed into the hospital and clinic from the central energy plant. To build the medical tower, the project team would have to demolish this corridor and construct the tower between the two buildings without disrupting these services. “It’s almost like taking a bite out of the middle of a banana,” Hover says.

Crews had to familiarize themselves with the hospital’s systems and connections to develop a plan for how to reroute these utilities while keeping the two buildings functional. Much of this work took place after-hours and on weekends to prevent disruptions to patient care.

“When you’re sandwiching a building in between two others, there are multiple connection points to those existing structures,” Hover says. Some of those 25 connection points were in highly sensitive areas, such as the pediatric and neonatal intensive care units. “Those are some of the sickest patients in the hospital. So things like infection control, coordination with the hospital and after-hours work are all paramount to being successful,” Hover says.

Crews brought in temporary hoses, chillers, generators and fuel tanks to keep the hospital running 24/7 throughout this process. During the partial demolition of the corridor, the engineer added extra steel columns to ensure stability for utilities serving the two buildings.

Another engineering consideration was that the central and west hospital towers and the hospital’s central energy plant had to have new building expansions connecting directly into them. “The new structures not only needed to integrate the new vertical loads, but also the new lateral loads due to increased wind exposure,” Putman says. “We analyzed the combined structures and strengthened them where required.”

Pile clearances were as close as 3 ft from the existing buildings, Putman says. Poor soil conditions required the engineer to use 70-ft-long auger cast piles for foundations.

Collaboration became critical on the tower when the hospital decided to relocate its heliport to the tower’s rooftop. “It became a daily coordination effort with the structural engineer and architect to make sure that as we were pouring columns and extending the structure up, that we had the right reinforcements and elevations,” Hover says.

The project is using 26,519 cu yd of concrete and 820 tons of steel. It will include 32 miles of plumbing pipe and 352 miles of electrical wire.

A milestone occurred in February, with the installation of one of the highlighted features of the campus—a glass-enclosed pedestrian skybridge connecting patients and visitors to the hospital’s main campus. The elevated walkway links the new parking garage to the Betty & Hank Lauricella Pavilion, a new two-story outpatient clinic entrance.

After fabrication was complete, crews placed the 13-ft-wide skybridge onto a barge so it could travel through the Harvey Canal to the Mississippi River, where it then floated more than 24 miles upriver to the Port of New Orleans’ Nashville Street wharf, just downriver from the hospital. The structure was then loaded onto two hydraulic platform Goldhofer trailers, transported down the levee and along Henry Clay Avenue—the main traffic route through the campus—and set in place with a single pick. B&G Crane Service LLC used a 500-ton crane to hoist the structure into place. The entire process took place over one weekend to minimize shutdowns on Henry Clay Avenue.

Another unique aspect of the medical tower is the team’s use of metal wrap, which consists of wall panels that consolidate traditional exterior sheathing, waterproofing and wall cavity insulation into a single panel. “Your building is essentially dried-in once that panel is installed, as opposed to having all of the additional layers and trades required to get the exterior of the building dry,” Hover says.

Energy efficiency was one of the key design considerations of the expansion, and engineers sought out systems such as the all-in-one paneling to lower utility costs and make the campus more efficient. Upon completion, the hospital’s energy usage will be 35% lower than the national average for community hospitals. However, LEED certification is not being pursued.

Children’s Hospital has evolved significantly since its original construction in the 1950s, having undergone many additions and alterations. Through its current expansion, hospital officials wanted to improve infrastructure and technology and make it easier for patients and their families to access vital services.

“Children’s has a proud history of serving the children of Louisiana since its founding in 1955, and this expansion will enable the hospital to continue to care for the sickest children—all kids and only kids,” Schaefer says.

Making room for the massive overhaul meant first expanding the hospital’s land base. In 2014, Children’s Hospital acquired 17 acres of property adjacent to its main campus; the land was once the site of the New Orleans Adolescent Hospital. The first phase of the project was completed in October 2018 with the opening of the new parking garage connecting to the skybridge and the Betty & Hank Lauricella Pavilion.

By mid-2020, the hospital will open its 51-bed behavioral health center, a 28-bed cardiac intensive care unit, a new pediatric imaging department and an entirely new surgical center. The entire expansion is on pace for completion by spring 2021. 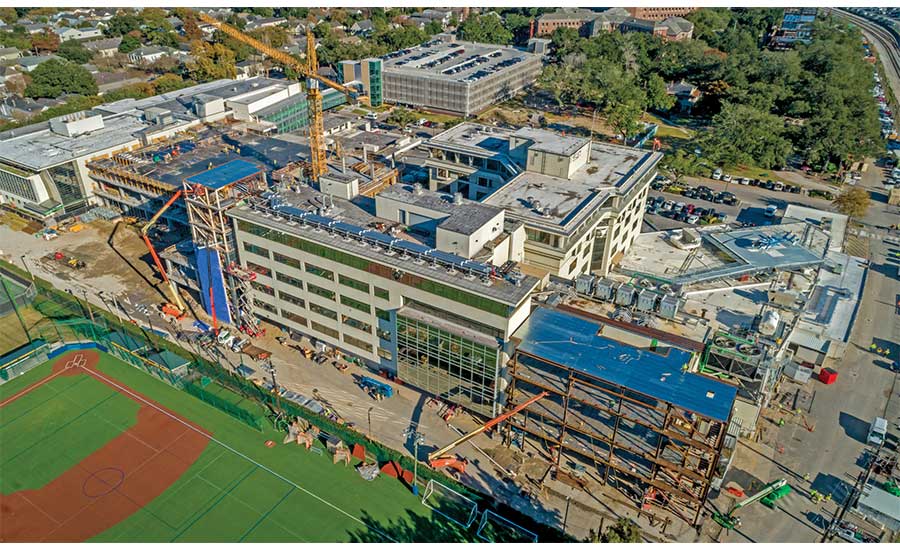 We are pleased to announce the promotion of James “Jason” Miranda to Operations Manager within Lemoine’s Commercial East Market. Jason joined The Lemoine Company as a Project Engineer in 2003 and during his 16-year tenure with the firm has continued to grow his role through various positions in Lemoine’s Estimating and Operations departments.

During his tenure, Jason has overseen some of Lemoine’s most challenging and critical works including signature projects Nicholson Gateway Development at LSU, LSU Tiger Stadium South End Zone Expansion, Center for Coastal and Deltaic Solutions (Water Institute of the Gulf), The Advocate Office Building, Shaw Center for the Arts, and Vista Bella Condominiums (Orange Beach, AL).

Jason is a 2003 graduate of LSU with a Bachelor of Science in Construction Management. He also obtained an Associate of Applied Science in Architecture from Delgado, New Orleans (2000).

We’d like to recognize our Lemoine Wellness Champion of the Month for November – Tyler Duhon!

For those of you who don’t know, Tyler started his journey with Lemoine in January of 2016 as a Project Engineer working on commercial projects. He was then asked to join our Lemoine Disaster Recovery division as a Project Manager and has worked on projects in Puerto Rico, Texas, and North Carolina.

When asking Tyler what motivates him to stay active and healthy, he says we all want to look our best and that’s one of his biggest motivations. Tyler also mentioned his long-term health. He advises that if you start good habits, they can carry with you for life. Tyler mentions exercise is a great mental release since the work he does at Lemoine can be intense and stressful.

Tyler said that he formed healthy habits throughout his childhood/teenage years being involved in sports. “It just became a part of what I do on a daily basis and I stuck with it”.

If Tyler could give one piece of advice about living a healthy lifestyle, it would be “get up and get after it! There’s a lot of diets and special classes but it’s simple; find something that works for you and stick with it and the results will follow. It’s not easy but nothing worthwhile is easy”

Thanks for sharing your story, Tyler! We look forward to continuing to support you in your journey! Continue to strive to be a healthier version of yourself every day.